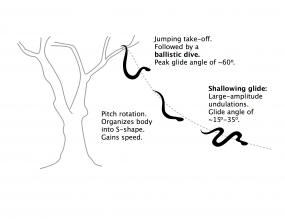 Submitted: September 16, 2013. Accepted in Physics of Fluids: February 10, 2014. This paper presents a computational study of the aerodynamics of an anatomically correct cross-section of Chrysopelia paradisi, the flying snake. These animals inhabit the canopy of rainforests in East Asia, and have a very peculiar method of locomotion: they jump from tree branches, change... Continue » 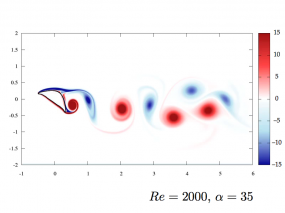 Vorticity field in the wake behind a snake cross-section at a Reynolds number of 2000 and 35-degrees angle of attack.

These animations show the vortex wake behind a snake cross-section (two-dimensional profile), obtained with full Navier-Stokes simulation. The solver is an immersed boundary method that uses GPU hardware, cuIBM (open-source under the MIT license). The cases shown vary in Reynolds number (Re=1000, 2000) and angle... Continue » 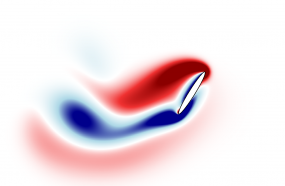 Vorticity field of the flow around a flapping elliptical airfoil, computed with cuIBM.

Validation of the cuIBM code

We have developed a Navier-Stokes solver, called cuIBM, to simulate incompressible flows using immersed boundary methods.  This document provides background on the numerical methods implemented in the cuIBM code framework and evidence of the validation exercise carried out by the authors. The code provides... Continue »