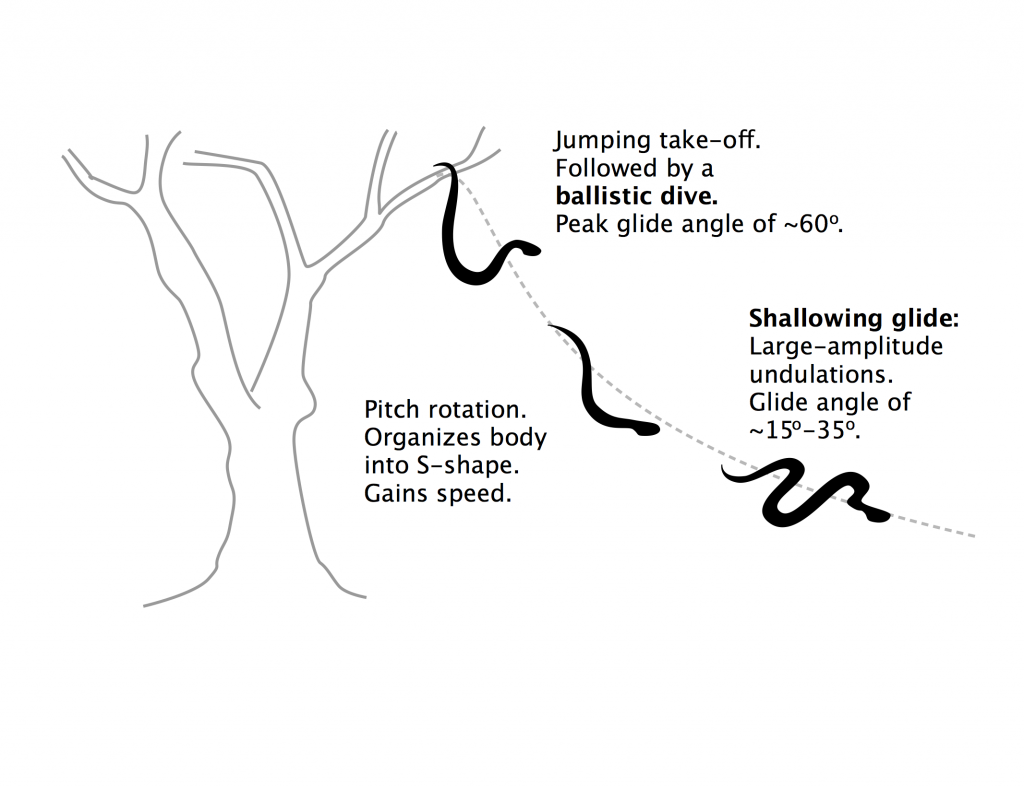 Sketch of the gliding behavior of a flying snake.

This paper presents a computational study of the aerodynamics of an anatomically correct cross-section of Chrysopelia paradisi, the flying snake. These animals inhabit the canopy of rainforests in East Asia, and have a very peculiar method of locomotion: they jump from tree branches, change their body shape and adopt a posture that allows them to glide. Their gliding performance is surprising, achieving low glide angles and being able to maneuver in the air.

Flying snakes use a unique method of aerial locomotion: they jump from tree branches, flatten their bodies and undulate through the air to produce a glide. The shape of their body cross-section during the glide plays an important role in generating lift. This paper presents a computational investigation of the aerodynamics of the cross-sectional shape. We performed two-dimensional simulations of incompressible flow past the anatomically correct cross-section of the species Chrysopelea paradisi, showing that a significant enhancement in lift appears at an angle of attack of 35 degrees, above Reynolds numbers 2000. Previous experiments on physical models also obtained an increased lift, at the same angle of attack. The flow is inherently three-dimensional in physical experiments, due to fluid instabilities, and it is thus intriguing that the enhanced lift appears also in the two-dimensional simulations. The simulations point to the lift enhancement arising from the early separation of the boundary layer on the dorsal surface of the snake profile, without stall. The separated shear layer rolls up and interacts with secondary vorticity in the near-wake, inducing the primary vortex to remain closer to the body and thus cause enhanced suction, resulting in higher lift.

Featuring this work in the media and blogs