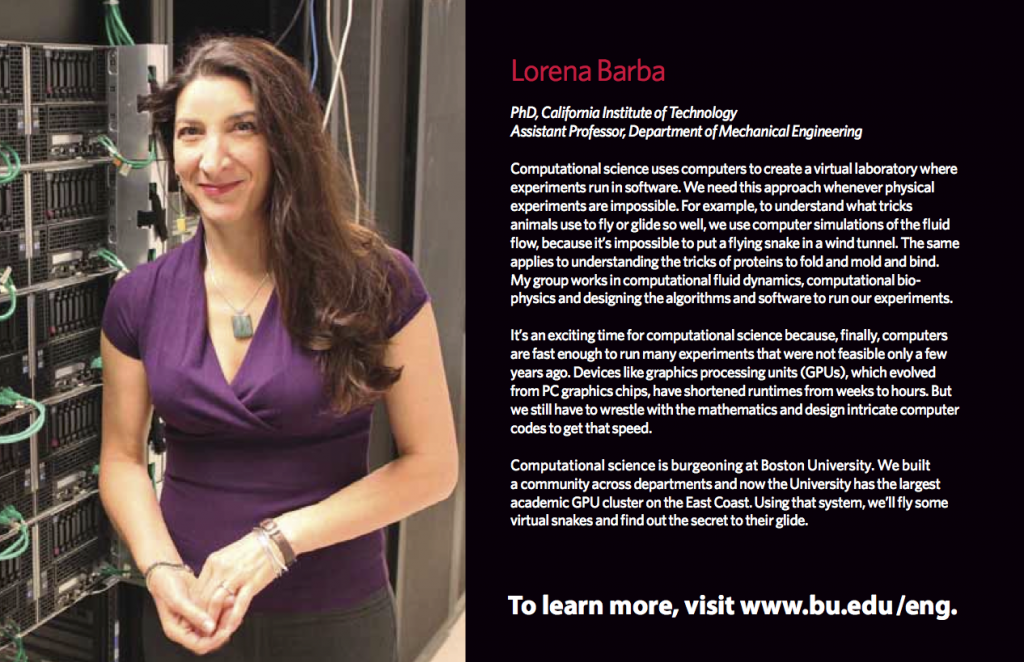 Back-cover feature of the Spring 2013 issue of ENGineer magazine.

The back cover of the Spring 2013 issue of ENGineer, the BU College of Engineering alumni magazine, features Prof. Lorena Barba. The text of the feature is reproduced below.

Computational science uses computers to create a virtual laboratory where experiments run in software. We need this approach whenever physical experiments are impossible. For example, to understand what tricks animals use to fly or glide so well, we use computer simulations of the fluid flow, because it's impossible to put a flying snake in a wind tunnel. The same applies to understanding the tricks of proteins to fold and mold and bind. My group works in computational fluid dynamics, computational biophysics and designing the algorithms and software to run our experiments.

It's an exciting time for computational science because, finally, computers are fast enough to run many experiments that were not feasible only a few years ago. Devices like graphics processing units (GPUs), which evolved from PC graphics chips, have shortened runtimes from weeks to hours. But we still have to wrestle with the mathematics and design intricate computer codes to get that speed.

Computational science is burgeoning at Boston University. We built a community across departments and now the University has the largest academic GPU cluster on the East Coast. Using that system, we'll fly some virtual snakes and find out the secret to their glide.

Prof. Barba is also quoted on page 5, regarding the news about the new 160-GPU cluster at BU.