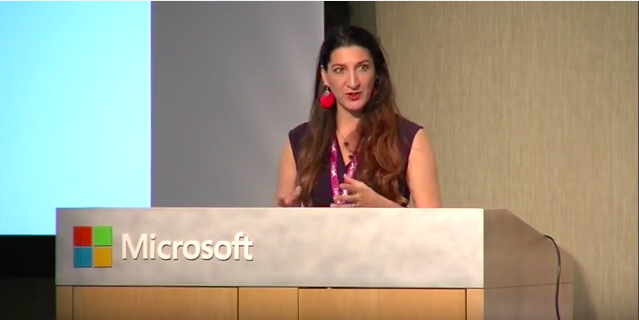 The keynote was titled "Data-driven education and the quantified student" and described the rise of learning analytics, inviting data scientists to work with learning scientists to contribute to this field.

PyData.org is a community for developers and users of Python in data analytics. The PyData Conference is held in various cities around the world.

Enjoying @LorenaABarba's keynote on Learning Analytics at the intersection of my higher ed past and dev future #PyData #edtech — Elia (@Elia_MG) July 26, 2015

a panopticon of data about the student => productizing "the fit-bit of learning" .. RUN! @LorenaABarba #PyData — paco nathan (@pacoid) July 26, 2015

Tracking students: do they consent? Can they access their own data? Do we value students' privacy? Great keynote @LorenaABarba #PyData — mincome liker (@valrus) July 26, 2015

The inimitable @LorenaABarba at #PyData injecting intelligent skepticism into our thinking about data and education. pic.twitter.com/xaQO1i39lD — Fernando Perez (@fperez_org) July 26, 2015

#TIL with the people whom I learned from the most @LorenaABarba @holdenweb #PyData - thank you so much @NumFOCUS! pic.twitter.com/19Bpj09UIR
— paco nathan (@pacoid) July 27, 2015