Barba at the NAE FOEE Symposium 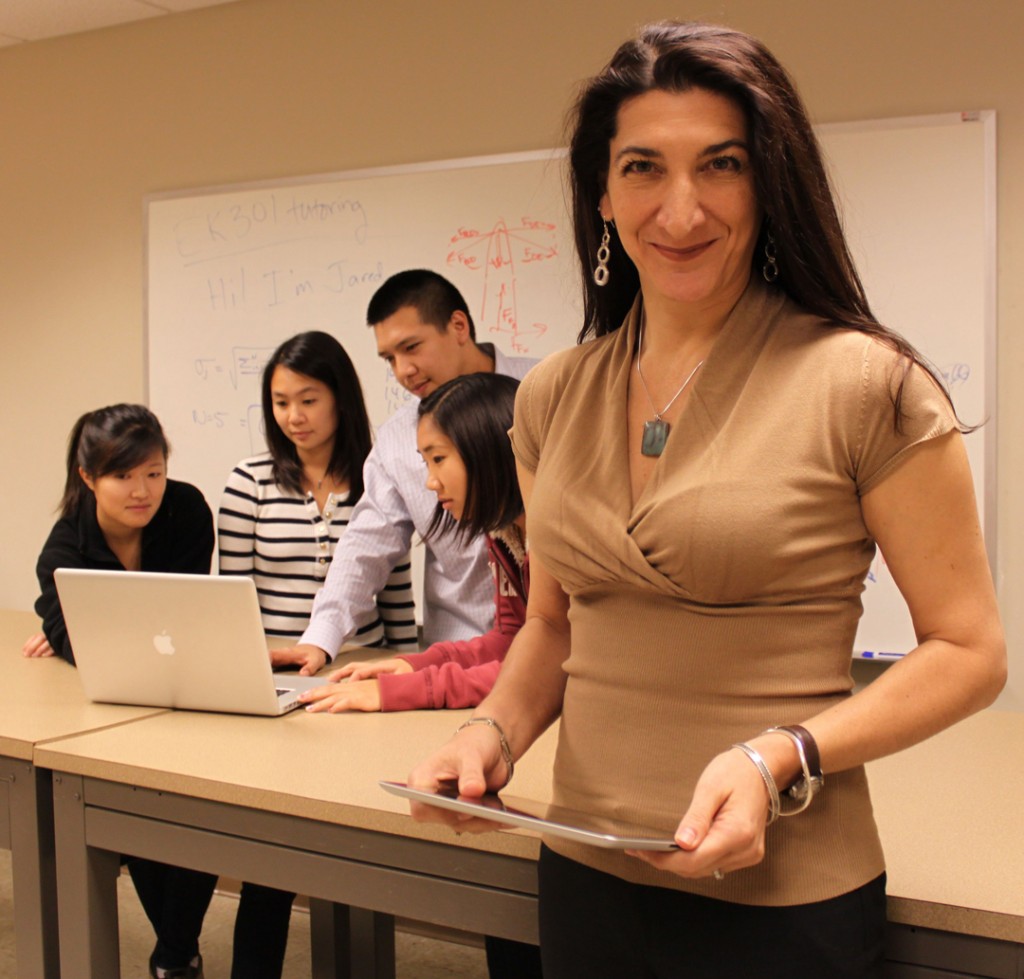 Professor Barba, with students in class. She has adopted flipped classroom approaches to teaching, with video being used to deliver content, and active-learning in the classroom. Photo by Saana McDaniel (2012).

Professor Barba was selected to participate in the National Academy of Engineering (NAE) Frontiers of Engineering Education (FOEE) symposium 2012. Here is a reflective note she wrote after coming back from this event in October 2012.

Engineering education changes slowly. At the first engineering schools in America—West Point (1819), Rensselaer Polytechnic Institute (1828), University of Virginia (1833)—a professor lectured at the blackboard just like today. It took decades for engineering faculty to focus on engineering science, motivated by the demand for research created by WWII and influenced by immigrant European professors (Seely, 1999). But in the 1990s, many engineering schools began to revert that emphasis on engineering science and search for a new balance. The common complaint from industry that graduates were not prepared well in practical engineering skills drove reformers to refocus on design and problem-solving.

With reform efforts still not finalized, the 21st century hit hard with new challenges. Globalization has intensified with the immediacy of internet communications and the fast rise of economies abroad, especially India and China. The threat of terrorism has painted every profession with new concerns related to security. And the tight economy, with rising student debt and decimated college budgets, has everyone wondering how to deliver quality engineering education while bringing costs down.

In view of these challenges, the need for innovation in engineering education is greater than ever. How to catalyze this innovation? In formal scientific research, we have a social dynamic that helps progress, dissemination and change. We meet at conferences to communicate the latest research, we establish collaborations, and we publish continually our results. A similar social dimension in education can help progress and innovation. The National Academy of Engineering (NAE) Frontiers of Engineering Education (FOEE) symposium serves this goal: to catalyze change by bringing together recognized innovators in engineering education.

The National Academy of Engineering (NAE) Frontiers of Engineering Education (FOEE) symposium serves this goal: to catalyze change by bringing together recognized innovators in engineering education.

At the 2012 FOEE symposium—the fourth such event—invited speakers focused on modernization efforts providing flexibility in the curriculum, study abroad and experiential learning, and use of technology in the curriculum. To kick-off, GE's Eric Ducharme spoke about the needs of industry. The fundamentals of engineering science are important, he said, but industry places equal priority on systems thinking, multi-disciplinary skills, communication, ethical standards and integrity. The silos of engineering —mechanical, electrical, industrial, civil— are often not conducive to systems thinking, so he suggested that to be responsive to industry needs universities need to allow flexibility in the curriculum. Ducharme called for more opportunities for students to work in projects, saying "we look for people who have built stuff."

The next speakers were right on target. Prof. Alice Agogino talked about "authentic" project-based learning, and described the new product development course at Berkeley, where student projects are judged by industry representatives. According to alumni surveys, students valued most learning to work in teams, over all other course objectives. Prof. David DiBiasio presented WPI's program of study-abroad and off-campus experiences, in which about half of all undergraduates participate. Prof. Mary Boyce described MIT's flexible and customizable engineering degree, with a concentration designed by the student, and half-semester courses that allow for greater flexibility.

The poster session and break-out groups enabled participants to discuss their educational innovations. Recurring themes in these discussions were moving away from the lecture format, using technology in the classroom and adopting active-learning methods. The "flipped classroom", where content is delivered on video and class time is used for problem-solving and team work, was the talk of the town. Perhaps finally we'll move away from the chalk-wielding, sage-on-the-stage professor lecturing at the blackboard.