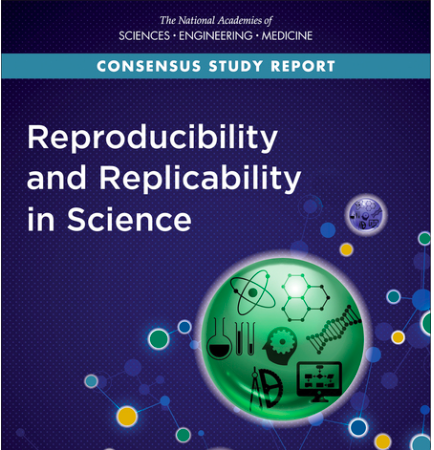 Prof. Barba is a co-author of the National Academies study report on "Reproducibility and Replicability in Science." The National Academies of Science, Engineering and Medicine (NASEM) carried out this study on commission from the National Science Foundation, with additional sponsorship from the Sloan Foundation. This report presents the consensus of the committee and is the result of half-a-dozen in-person meetings, multiple teleconferences, and months of collaborative writing. The general conclusion of the report can be summarized in the short mantra:

No crisis, no complacency.

One of the pathways by which the scientific community confirms the validity of a new scientific discovery is by repeating the research that produced it. When a scientific effort fails to independently confirm the computations or results of a previous study, some fear that it may be a symptom of a lack of rigor in science, while others argue that such an observed inconsistency can be an important precursor to new discovery.

Public Release of the Reproducibility and Replicability in Science Report from The National Academies on Vimeo.

Our report on Reproducibility and Replicability in Science released yesterday, covered by @physicsworld https://t.co/ikAg8s1vsn #ReproducibilityInScience

Our report says that people should seek evidence when contemplating a serious decision or policy based on results of a single study. Read more recommendations: https://t.co/6FINlg8tge #ReproducibilityInScience pic.twitter.com/cfFINa6qf7