(Can be used for speaking engagements at conferences and events; updated April 2022)

Lorena A. Barba is professor of mechanical and aerospace engineering at the George Washington University in Washington, DC. She holds a PhD in aeronautics from the California Institute of Technology and BSc/PEng degrees in mechanical engineering from Universidad Técnica Federico Santa María, Chile. Her research interests include computational fluid dynamics, high-performance computing, and computational biophysics.

An international leader in computational science and engineering, she is also a long-standing advocate of open source software for science and education, and she is well known for her courses and open educational resources. She was a recipient of the 2016 Leamer-Rosenthal Award for Open Social Sciences, and in 2017, was nominated and received an honorable mention in the Open Education Awards for Excellence of the Open Education Consortium.

Dr. Barba served (2014–2021) in the Board of Directors for NumFOCUS, a 501(c)3 public charity in the United States that supports and promotes world-class, innovative, open-source scientific software. She is also an expert in research reproducibility, and was a member of the National Academies study committee on Reproducibility and Replicability in Science, which released its report in 2019. She served as the Reproducibility Chair for the SC19 (Supercomputing) Conference, is editor-in-chief and track editor for Reproducible Research in IEEE's Computing in Science Engineers, was founder and associate editor-in-chief for the Journal of Open Source Software and is editor-in-chief of The Journal of Open Source Education. She was General Chair of the global JupyterCon 2020 and was named Jupyter Distinguished Contributor in 2020.

Barba received the NSF Faculty Early CAREER award (2012), was named CUDA Fellow by NVIDIA Corp. (2012), is an awardee of the UK Engineering and Physical Sciences Research Council (EPSRC) First Grant program (2007), and was an Amelia Earhart Fellow of the Zonta Foundation (1999).

Lorena was born in Valparaíso, Chile. She is the oldest of three daughters of Jorge Eusebio Barba Gianotti (1940-1984) and Rosalinda Maritza Martinic Vrsalovic-Carevic. Commander Barba was an Officer of the Chilean Navy, and died in a civil aviation accident. Rosalinda lives in Reñaca, a lovely seaside town-like area of the tourist resort city Viña del Mar.

Lorena grew up in Viña del Mar. She and the family spent two years in Maryland, USA, while her father was appointed to the Chilean Naval Attaché in Washington, D.C. This meant learning English at an early age, which she ascribes as a determining factor in her future career success.

She received pilot training from her father since the age of 15 (not formally at first), then after obtaining the Student Pilot's Licence as soon as she turned 17 (the minimum age), logged her first solo flight. She was given a special award by the Naval Flying Club to finish her pilot training after her father's accident, and obtained her licence before starting University. The life-changing experience of becoming a pilot (including the many hours spent with the maintenance staff at the flying club, chatting and helping), determined her to a career in science and engineering. 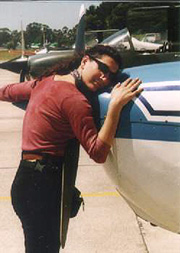 Lorena hugging the propeller of a Cessna 172 at Temuco airport.

Her first technical interest was aerodynamics, and she wished to be an aeronautical engineer. Unfortunately, no chilean university had a degree program in this subjec; only the Chilean Air Force did, but they did not accept women back then.

It would be several years later that Lorena participated in the opening of doors for women in Chile to be Air Force Officers, as she was invited to be part of the first program for women in the Air Force Reserve in 1995 (she holds the rank of Second Lieutenant, since 2001). Only 13 chilean women were invited to take part in this program, of which nine were private pilots. In 2001, for the first time women were able to participate in the general selection process of the Air Force Academy of Chile.