-body problem efficiently. The interaction of

masses appears to be a very expensive computation: its complexity is

because all bodies affect the gravitational potential at any one point. But with the knowledge that the force of gravitation decays with distance, we can use series expansions to approximate many masses that are far enough away. This is a very powerful idea that has found wide applications in science. In fact, the FMM has been chosen as one of the Top 10 Algorithms of the 20th Century.

The integral formulation of problems modelled by elliptic partial differential equations (PDEs) leads to numerical integration. Computationally, this has the same form as an

-body interaction, and the FMM can be used to obtain a result in

operations. In this way, fast 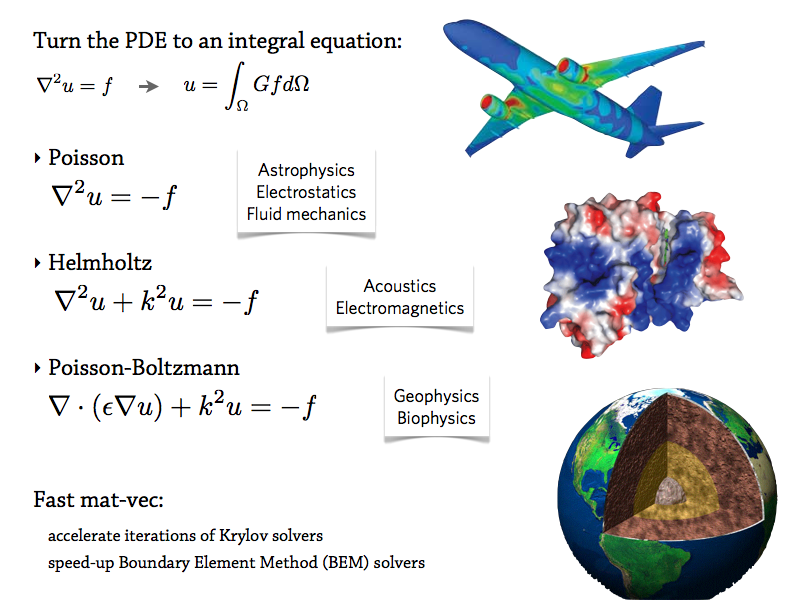 Applications of the fast multipole method

, but this algorithmic speed-up is multiplied by the hardware speed-up obtained when using GPU hardware.

In November 2011, we released the exaFMM code under the MIT license. This code is written in C++, is accelerated on GPUs with CUDA, and is parallel with MPI. We were able to run tests on a large GPU system, thanks to guest access via the Grand Challenge program of Tsubame in Japan, achieving 1 petaflop/s on a turbulence calculation using 4096 GPU cards.