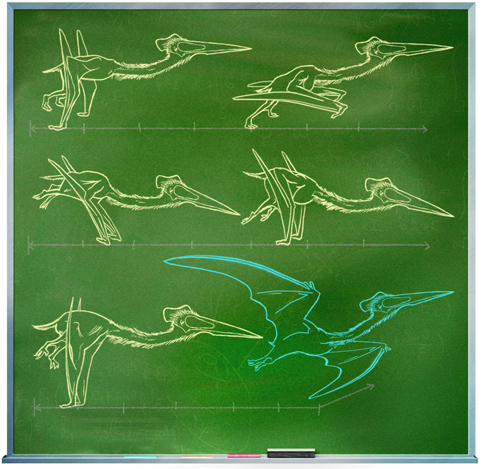 This is the first of a series of blog posts from students' course work for the "Bio-aerial Locomotion" class at GW's Mechanical and Aerospace Engineering Department. The students explore several controversial topics about a giant pterosaur's ability to fly.

On Sept. 22, 2013, Prof. Michael Habib (who was a guest speaker in our "Bio-aerial Locomotion" class a few weeks ago), posted on Google+ a seemingly innocuous note about there being "quite a few pterosaur workers at SVPCA this year." A commenter quickly dropped in to start a discussion about Habib's quadrupedal-launch thesis for how pterosaurs took off. Even the first comment was somewhat cynical with a suggestion that "the poor creature fell flat on its face." What ensued was an amusing argument about all things pterosaur.

In light of the various topics that popped into the Google+ argument, I decided to base a class activity on it. Students read the post and comment thread live in class, then were confronted with these questions to investigate in small groups:

After researching each question in groups of two or three, the students wrote a summary of their findings, which they continued to work on outside of class during the week. After slight editing, I've combined their write-ups into "Student guest blog posts" for your enjoyment.

by Akash Dhruv and Alex Golding

Pterosaur flight is of special interest to both paleontologists and aerodynamicists because it might represent a unique form of natural flight, very different to that of other flyers. The size and flight characteristics of pterosaurs have received considerable research interest for the last century but suffer from confusing interpretations of pterosaur biology and flight characteristics. Researchers have often argued about the aerodynamic characteristics of these animals, specifically if and how they can be analyzed using avian bio-mechanics.

Due to considerable differences between avian and pterosaur anatomy, avian parameters, when (incorrectly) applied to pterosaurs, yield interpretations of pterosaur flight that are problematic. The assumption of bird-like flight has led to assertions that giant pterosaurs were extremely lightweight to facilitate flight or, if more realistic masses are assumed, could not fly.

Recent research into scaling and morphing of pterosaur fossils shows that bird and pterosaur wing structure, humeri and femuri bending strength and launch kinematics are just too different. Thus, according to these findings, many previous conclusions that assumed mechanical similarity with birds, e.g., that giant pterosaurs were flightless, were based on inaccurate and poorly supported data.

How did pterosaurs take off?

Of particular interest in pterosaur flight is the launch. Pterosaurs were large and had significant weight, both a disadvantage when trying to get airborne.  The conventional bipedal launch, as used by birds, is problematic for the pterosaur.  Its hind limbs were not strong enough to provide the forces required for takeoff.

Some researchers, such as Dr. Sankar Chatterjee, present takeoff scenarios assuming a bipedal launch, but require strange conditions, such as running downhill into the wind (also difficult with weak rear limbs), takeoff from cliffs, or hanging inverted from trees and releasing to gain the speed required for flight.

Pterosaur Skeleton in “vaulting” position. Image from “On the Size and Flight Diversity of Giant Pterosaurs, the Use of Birds as Pterosaur Analogues and Comments on Pterosaur Flightlessness”, Witton and Habib, PLOS One (2010).

Of interest for comparison is the vampire bat: an existing creature today with similarly weak hind limbs, which executes a quadrupedal launch. This video of a vampire bat running on a small treadmill illustrates a possible form of locomotion on the ground with patagium-equipped strong fore limbs.

This other video shows a bat taking off with a quad launch:

Comparing a quadrupedal launch to a bipedal launch, one can identify that the former is dominated by the power from forelimb and pectoral musculature, whereas the latter is dominated by hindlimbs during take off. Thus, if the quadrupedal hypothesis is correct, the bending strength of humeri (bone in the forelimb) must have been larger than that of a femuri (bone in the hindlimb) for a pterosaur. Dr Habib supports this hypothesis with appropriate data. 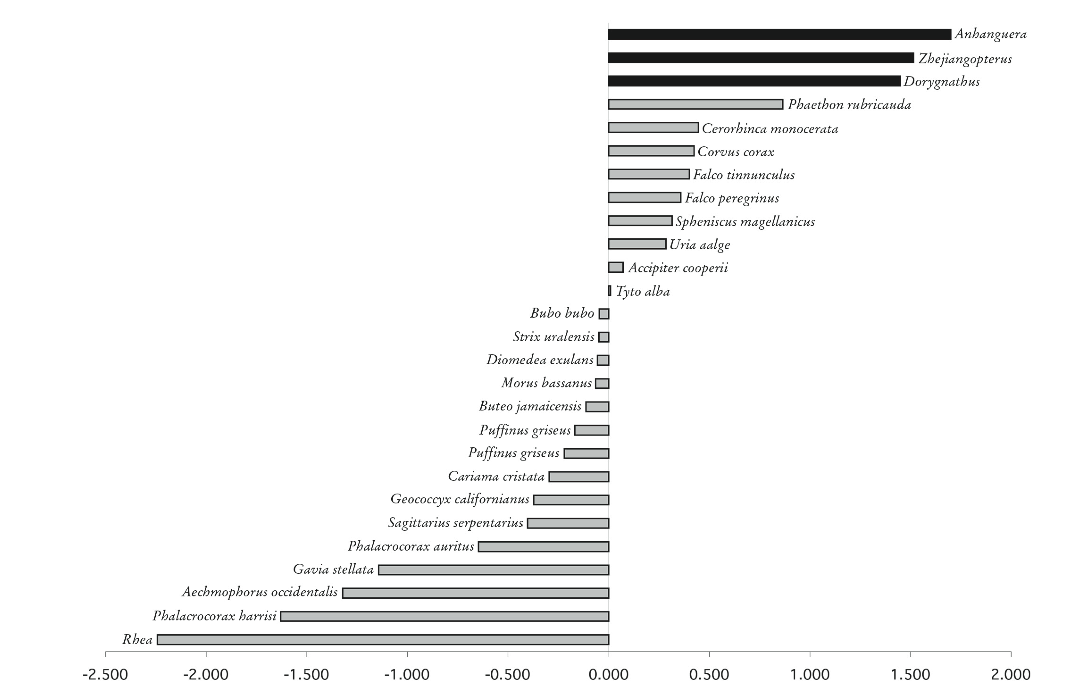 Strength ratios of humerus to femur for birds and pterosaurs. Figure 2 of Habib (2008), Zitteliana B28.

The graph above compares the log of the ratio of humeri to femuri bending strengths for different birds and flying reptiles. Notice that for many birds the values are negative: the ratio of humeri to femuri strength is less than unity, implying that the bending strength of the hindlimbs is greater than that of the forelimbs, a characteristic common in bipedal launchers.

If we examine the extremes of the graph, we find on one end birds such as the rhea and phalacrocorax harrisi, which are flightless but are very strong runners. Aechmophorus occidentalis, or the western grebe, demonstrates the strength of its femuri by performing a ritual called “weed dance” in which they rush through the water as if walking on it.

On the other extreme of humeral to femoral strength, we find some high-speed flyers, especially divers, and some swimming birds, such as penguins.  Both of these types of animals need high wing strength, either to pull out of steep dives, or to exert and withstand the larger forces necessary for swimming and diving into water.

The table above displays, among other things, the relative failure force of certain pterosaur bones and the avian expectation, by which we mean the expected failure force were avian bones scaled to the same size as the pterosaur bones.  Of interest is the fact that for pterosaur humeri, the observed failure force is about 2.5 times greater than the scaled expectation, while the femur presented above is about one third the expected strength.  Again, we see that the pterosaurs had significantly weaker hind limbs than the birds of today, suggesting that bipedal launch would have been impossible for them.

Footprints show they walked on all fours

Examining the fossils and the excavation sites, scientists found that pterosaurs walked on four legs.  Footprints found on a beach in France start abruptly, with the deepest footprints at the start of the track.  The tracks are interpreted as a landing site for a pterosaur (Mazin et al., 2009). This supports the claim that pterosaurs, though large and heavy, did fly.

Animation of a pterosaur landing and a drawing of the tracks found in France (Mazin et al., 2009)

Mechanism of a Quadrupedal Launch

A thesis submitted by Julia Molnar in March 2009 (Johns Hopkins University) explains how the actual quadrupedal launch could have worked. She used Dr. Habib’s kinematic model, which specifies the timing and duration of each phase of the launch sequence.

According to the thesis report, a quadrupedal launch is divided into four stages: Stance, Crouch, Vault and Launch.

Based on the findings and the fossils, Dr.Habib created a model to study the launch. The wingspan of the model was kept at 5 meters, based on the data available after careful study of the fossils. The kinematic model predicts that an aerodynamically optimal launch of a pterosaur with a 5-meter wingspan would have a velocity of 12.68 meters per second and a launch angle of 30°. Julia Molnar reconstructed the pterosaur's parabolic path during its launch. Experiments conducted on this model specified the maximum height a pterosaur can reach following a parabolic path (1.7 m) as the clearance required by a pterosaur for its first flight stroke.

Animation of a pterosaur's quadrupedal launch, by Julia Molnar:

Rough Calculations, based on the Model

Using the data presented by Dr. Habib and an estimated pterosaur body mass of 250 kg, some rough calculations yield the following results. A pterosaur would need to exert a force of about 5 kN over the 0.63-second vault and launch phases to reach the required speed for launch, which seems reasonable for an animal of such size and strength.  For comparison, this is about the average force a professional soccer player exerts on a kicked ball, or about half the maximum force generated by a human weightlifter.

From all of the data that we have examined, we are reasonably convinced by the conclusion that large pterosaurs were unlikely to be bipedal launchers, and, indeed, the quadrupedal launch seems quite plausible.