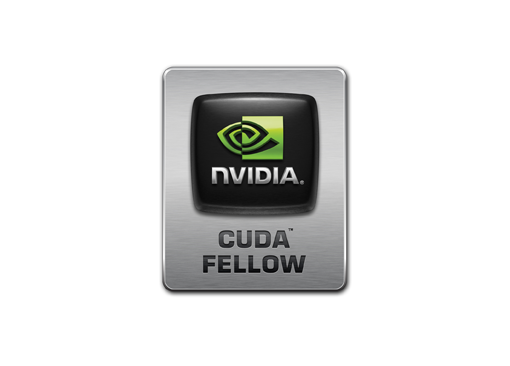 Prof. Barba is among four new CUDA Fellows  named by NVIDIA Corporation in advance of this year’s GPU Technology Conference. She joins an elite group of leaders in GPU computing [link updated].

Each of these individuals has demonstrated a passion and commitment to using CUDA and the power of GPU computing to help solve some of the worlds’ most challenging computational problems,” said Bill Dally, chief scientist at NVIDIA, in reference to the CUDA Fellows.
“We look forward to working with them to continue spreading the word about the industry-changing impact GPU computing offers to developers, researchers and academics worldwide.

The invitation-only CUDA Fellows program was established in 2008, with the inaugural nomination of Prof. P. J. Narayan of the Institute of Information Technology at Hyderabad, and Prof. Mike Giles of Oxford University.

Three CUDA Fellows were named in 2010, followed by the latest announcement which sums to nine individuals having been appointed so far. Of these, Prof. Barba is the first female appointee.

Owning and operating a cluster of GPUs is within reach at many institutions in middle-income countries, and Prof. Barba has personally driven the adoption of GPUs at Universidad Técnica Federico Santa María, which in 2011 became the first CUDA Teaching Center in Chile.

In January 2011, Barba led the NSF- and DOE-funded Pan-American Advanced Studies Institute "Scientific Computing in the Americas: the challenge of massive parallelism", which was held in Chile. Almost seventy graduate students and postdocs from the US and Latin America participated, receiving instruction on parallel computing and GPUs from world-leaders, including Prof. Takayuki Aoki (TokyoTech) who has also been named 2012 CUDA Fellow.

She also serves as Papers Co-Chair of the inaugural Innovative Parallel Computing conference, InPar'12, to be held in conjunction with the GPU Technology Conference.

Prof. Barba is co-principal investigator of the NSF grant that brought to BU the first GPU cluster, currently being used by her group and by other researchers across campus. She has also recently received the prestigious NSF CAREER award for her research in scalable algorithms on heterogeneous systems using GPUs.

About the CUDA Fellows Program

The CUDA Fellows Program recognizes individuals who are committed to leading the use and adoption of the CUDA architecture and GPU computing. CUDA Fellows have demonstrated the benefits of GPU computing to advance their fields of research, and have been instrumental in introducing GPU computing to their peers. Each CUDA Fellow receives a number of benefits, including the latest NVIDIA GPUs, a travel stipend, access to NVIDIA technical staff, and priority in receiving early releases of NVIDIA GPU hardware and software. CUDA Fellows receive continued support for their leading GPU computing research, and are invited to share their expertise at universities and technical conferences around the world.